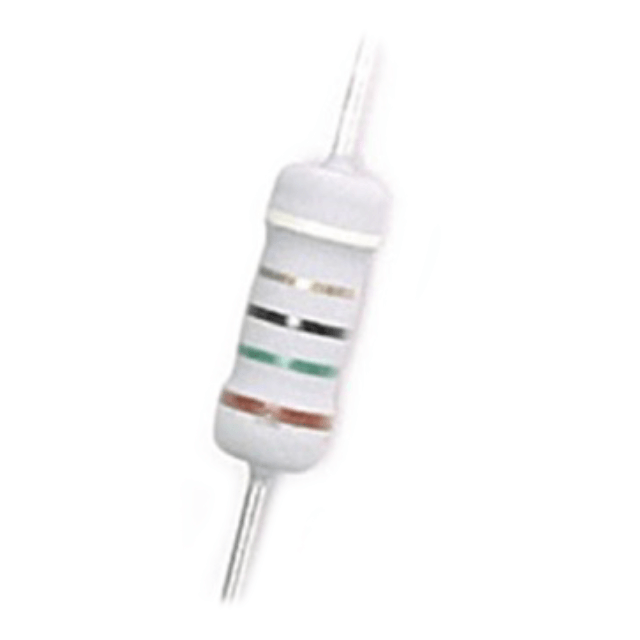 Special Feature：Fusible metal film resistor performs two functions at one time. It functions as a resistor in normal condition and changes into a fus when abnormal current passes through so as to protect the other component parts on the P.C. board.

This FR standard specification is for use in consumer electronics, computer, telecommunications, control instruments, etc.

C.1 Rated power is the value of the maximum load voltage specified at the ambient temperature of 70℃.

When the ambient temperature surpasses 70℃, the resistance value declines gradually as per the following DERATING CURVE.

It is calculated under the following formula:

Apply 4 times of the rated working voltage onto the resistor for 5 minutes continuously, no observation of flame.

Terminal is to be firmly connected with the resistor body, both electrically and mechanically, and allow easy soldering.

Markings are to be shown on the resistor body by color coding.

All measurements are taken under the standard testing condition at the ambient temperature of 25℃ ±2℃ and the relative humidity of 65% ±5%.

It is measured by bridge-method with the applied voltage not exceeding 1/10 of the rated voltage for 5 seconds; the allowable tolerance of all the resistance values within the E24 series is indicated as follows:

Take down the resistance value at the ambient temperature (25℃) and the value after the test taken at the temperature of higher than 100℃ for about 30-40 minutes, the readings will be used with the following formula to get the T.C. of ±350 PPM/℃.

where T0 : ambient temperature of 25℃

0: resistance value at ambient temperature of 25℃

To apply an additional 1.5 times of the rated voltage power on the tested resistor, if the voltage surpasses the maximum working voltage, follow the maximum working voltage. After 5 seconds, remove the voltage and place the resistors to the normal condition for 30 minutes, take the reading of the resistance values between pre-and-post test, by using the following formula, the resistance change rate shall be within the range of ±(2.5%R+0.05).

where R0=Resistance value before test

Following the following 4-step temperature cycles for 5 times, there should have no mechanical damage on the resistor body, the resistance value change rate between pre-and-post test shall be within the range of ± (2.0%R+0.05).

The resistors are put into a constant temperature/ humidity oven where the temperature is 40±2℃ and the relative humidity is 90~95% with the related voltage (not exceeding the maximum working voltage) for 90 minutes and then draw the resistors back to the normal room temperature for 30 minutes-take this as a test cycle. Repeat this test cycle for 500 or 1,000 hours. Leave the tested pieces back to a room temperature for about 60 minutes after the test cycle, take the readings of the resistance value change between pre-and post-test, the change rate is about ±(5.0%R±0.05).

95% of the circumference of the two lead wire terminals (about 4.0mm±0.8mm off the resistor body ) is to be dipped into a solder pot with melted solder of 350℃±5℃ for 10 ±1 seconds.Thereafter, put the resistors back to normal temperature for 3 hours. Take the reading of the resistance value change rate between pre-and-post test which is about ± (2.0%R+0.05).

Leave the resistors on a test stand and put all the samples inside a constant temperature oven of 70℃± 2℃, be sure there is no temperature interference on the resistors in the oven, apply D.C. rated voltage (not exceeding the maximum working voltage) for 90 minutes, off power 30 minutes-take this as a test cycle. Repeat this test cycle for 1,000 hours and then leave the tested pieces back to a normal room temperature for an hour for cooling. Take the reading of the resistance value change rate between pre-and-post test which shall be within the range of ± (5%R+0.15).

8.1. The power rating is 1W, the resistance value is 470, apply 16 times of the rated power on the resistor, the sample piece will be fused within 60 seconds. The fusing voltage calculation is as follows:

8.2 Fusing definition: The value of the tested piece becomes magnitude or 100 times or above of the resistance value.

8.3 The fusing characteristics will differ from the standard conditions on any values under 470. Quality representative samples will be submitted for approval prior to production.

Fix one end of the terminal firmly, apply a static load of 2.5kgs. (under 1W - 1kg) onto the other terminal for 5 seconds. No observation of any damage or breakage on the terminal.

Fix one end of the terminal firmly, turn the other terminal of 90 rotation and repeat the same test in a reverse direction. No observation of any damage or breakage on the terminal.

To bend the terminal at the point of about 6mm from the resistor body to 90 then catch the terminal at 0.8mm apart from the bent point end and turn it (clockwise) by 360 degrees perpendicular to the resistor axis at a speed of some 5 seconds per turn, and do the same counterclockwise again which constitutes a whole turn. Repeat the turn for 3 times. No observation of any damage or breakage on the terminal.